It does not take Superman to work this out 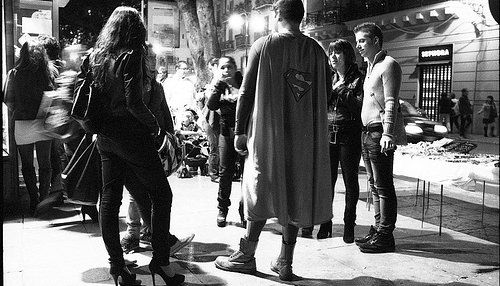 The Guardian says ‘ We are not producing enough young people with the skills to meet the needs of UK employers, the research finds, and the skills they do have are well below the levels of our international competitors. If that were not enough, even those with advanced skills may soon be made redundant by the influx of smart machines into our workplaces.

The UK Commission on Employment and Skills report catalogues chronic shortages of skilled workers. Meanwhile, those with qualifications are not meeting employers’ expectations, the report says, leading to complaints that applicants from universities and colleges are not being adequately prepared.

A report as long ago as 2012 by McKinsey said ‘Around the world, the International Labour Organization estimates that 75 million young people are unemployed. Including estimates of underemployed youth would potentially triple this number.’

The most interesting thing is later in the report The Guardian says,

‘Fewer than half of youth and employers, for example, believe that new graduates are adequately prepared for entry-level positions. Education providers, however, are much more optimistic: 72 percent of them believe new graduates are ready to work. The same disconnect occurs with regard to education; 39 percent of education providers believe the main reason students drop out is that the course of study is too difficult, but only 9 percent of youth say this is the case.’

In summary, education does not understand that it is not meeting its obligations and is content with teaching for the national curricula of it’s country and satisfying the shallow assessment criteria which appear to bear little relevance to  the needs of learners or their future employers.

The facts show there are jobs available worldwide which cannot be filled without further training because the job applicants do not have the skills for the jobs available.

Does this indicate that the subjects being taught in schools are wrong? Probably not, but are there other things we should be teaching? In further and higher education there certainly seems to be a problem.

There are more technical jobs available than jobs for graduates but we continue to churn out graduates and hope that they find jobs. But, for example, as waiters? The profile of technical jobs are seen as of a lower level and dropout rates in our FE courses in the EU are averaging 17%+ but that figure rises dramatically in areas of economic deprivation.

The debates and conversation on social groups seem to be saying that there is a growing recognition of a problem and that there various different solutions and suggestions being offered.

None of these has gained any traction so far because they are either trying to change the education system or it’s curricula and this will take years, or  they are just localised projects.

There are many companies reaching out to higher education, especially in the USA although Rolls-Royce in the UK has made similar initiatives to create better links between education and employment.

The most successful project I have heard of so far has been in Holland where six years ago Max Hoefeijzers and his team created Leerpark on an unwanted piece of land in Dordrecht near Rotterdam.

There are many extraordinary things about this campus and its achievements:

This project is a beacon of light and the principles founded in this project are being explored and rolled out in Dutch education at all levels.

What we need to do is to somehow share these kinds of projects and learn the lessons from them to move forward.

The question is, can that skill of self-reflection taught to all teachers, be adopted by the education managers who employ them.

It seems to date that education managers have not been able to do this and so we stumble on!